Here is a tutorial to edit the Music House Songs from NewerSMBW in the most efficient way. To follow this tutorial, you will need to be able to know how to compile NewerSMBW's source code.

-The NewerSMBW Music Challenge Generator (WARNING: This tool is in a VERY EARLY BETA state, so make sure to often save your file to avoid loosing progress due to a crash.) 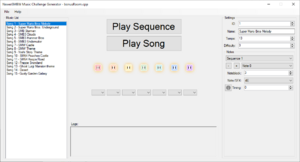 Click on "File", then "Open File..." and select the bonusRoom.cpp file located in the src folder of your NewerSMBW Source Code instance.

They are composed of 4 Sequences.

Each Sequence contains 1 to 15 Notes

Each Note contains three informations: -The noteblock it will use

-The SFX it will use

Here is how the note timing works:

A note will wait its timing value minus the previous note's timing value, all of this multiplied by the song's tempo of frames before being played.

I know it doesn't sound clear, so here's an example:

If the previous note's timing was 12

If the current note's timing is 16

Since the game runs at 60 frames per second, then the note will wait 52/60 ≈ 0.866 seconds before playing after the last note was played.

In the NewerSMBW Music Challenge Generator, select the song you would like to edit on the left list.

The Song's properties should list in the boxes on the right.

You can select the Sequence you want to edit in the Sequence Drop List that is on the right, under the Difficulty Box.

You can also select the note you want to edit in the selected Sequence in the Note Drop List that is on the right, under the sequenceSequence Drop List. The note's values will then show in the boxes under it.

Then you can edit the different properties in the different boxes. You can add and remove notes with the "+" and "-" buttons on the left of the Note Drop List, if you need to.

The NewerSMBW Music Challenge Generator should freeze for some seconds, depending of the writing speed of the device where the source file is in.

When it's done saving, you can close the NewerSMBW Music Challenge Generator.

Now, you just need to compile your edited source code. Then move the compiled files in the NewerRes folder of your game, and launch it! Go in the Music House you put your song on, and have fun playing it !

Retrieved from "https://horizon.miraheze.org/w/index.php?title=Changing_Music_House_Songs&oldid=2142"
Category:
Cookies help us deliver our services. By using our services, you agree to our use of cookies.